When Jesus arrived, he found that Lazarus had already been in the tomb for four days. Now Bethany was near Jerusalem, only about two miles away. And many of the Jews had come to Martha and Mary to comfort them about their brother. When Martha heard that Jesus was coming, she went to meet him; but Mary sat at home. Martha said to Jesus, “Lord, if you had been here, my brother would not have died.” [But] even now I know that whatever you ask of God, God will give you.” Jesus said to her, “Your brother will rise.” Martha said to him, “I know he will rise, in the resurrection on the last day.” Jesus told her, “I am the resurrection and the life; whoever believes in me, even if he dies, will live, and everyone who lives and believes in me will never die. Do you believe this?” She said to him, “Yes, Lord. I have come to believe that you are the Messiah, the Son of God, the one who is coming into the world.”

Martha was grieving, continually drying the tears from her eyes and probably anxious about attending to the well wishers that filled her home after a long walk from Jerusalem. That was Martha’s nature. She goes out to meet Jesus and greets him with a reproof. If only he had been there, he would have been able to cure Lazarus. She’d seen enough miracles to have every confidence in Jesus to save her brother. Even now after his death and entombment, she made a desperate plea not knowing what to ask for really. She simply knew that Jesus had the power of God to do something, to take away her pain and grief.

I’ve tried the same tactic with God so many times over the years. I’ve essentially prayed, “You can do anything you want. So, if you won’t do what I want, just do something to make the pain go away.” I saw this print entitled Contract by Darren White last week, which reminded me of those times and how desperate I’ve been. 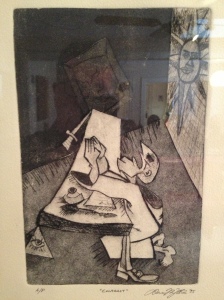 I have to learn over and over again to simply give up clinging to what I want so desperately, let the pain wash over me, and to allow myself to rest in God’s love, to let Him do what He will. I’m like Martha, too, in being trapped in my own certainty, my confidence in my understanding. Martha didn’t really listen to Jesus; she assumed she knew what he was talking about and she knew her own belief about the resurrection on the last day. Jesus had to gently help her understand that he could do so much more than what she imagined. Then he checks to make sure she understood him. She confesses her faith that he is the Messiah, the Son of God.

However, she also confessed that Jesus is the one coming into the world. Not that he was the one or will be the one. Martha finally understood that he is the resurrection and the life. I like the way John Shea in On Earth As It Is In Heaven puts it, “Resurrection is not only a future happening. It is present in Jesus right now….[R]esurrection and life are what happens to those who are in union with Jesus.” For me that is a profound awareness, that in dying to myself I am living in union with Jesus right this very moment.

John Shelby Spong in The Fourth Gospel links Lazarus and the beloved disciple in this way. “He [the beloved disciple] is a mythological character, a symbol of those who see, of those who respond and of those who are transformed. He is the archetype of the Jesus movement. He represents the ones who are born of the spirit, the ones who are able to taste and experience, to share in the new life that Jesus came to bring. He is the ‘Lazarus’ who has passed from death into life. The one who knows that to be in Christ is to have the life of God flow through him as the life of the vine flows through the branches….The ‘beloved disciple’ is thus the ultimate definition of a follower of Jesus.

That’s what Jesus is trying to get me to understand. He is the resurrection for me today, the way of transformation from death to life, the life of God flowing through me as a follower of Jesus. In reciting the Creed from now on I will be saying not only do I believe in the resurrection of the dead; i believe in the resurrection of the living. The living are far more important than the dead. It is only the living who can bring about the kingdom of God today, not the dead. As Martha said, Jesus is coming into the world today, not some far-off tomorrow.